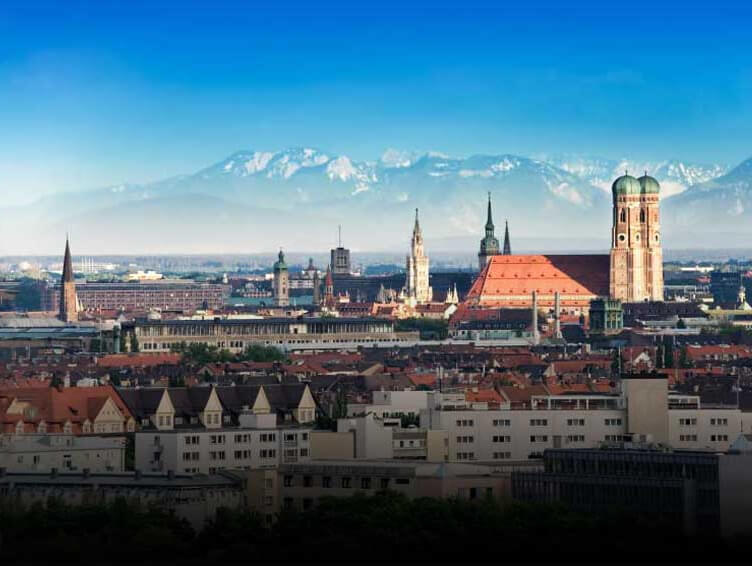 Munich (München) is the capital of Bavaria, famous for its beer-guzzling populace and Oktoberfest. Not to mention world famous attractions like the Nymphenburg Palace and Marienplatz. Throw in the urban pleasures of a big city along with the Dachau Concentration Camp and the German Alps nearby, and you have one of the best tourist destinations in Germany. Actually, it is the second most popular city for tourists in Germany. You will never have time enough to see and do everything here, but you can try. You will have to get a car for hire in Munich for a city tour and visiting attractions nearby.

Rent a Car in Munich for a City Tour

You can tour till the cows come home, but you will never be able to see all the museums and Churches and historic buildings, palaces, parks and gardens here in Munich. It is far better to either enjoy themed tours like Hitler's Munich or a beer tour (see below), or stick to the top 5 or 10 attractions that simply cannot be missed. Assuming you have got a car for rent in Munich, you must go around and see Marienplatz with the new town hall and the adjacent Frauenkirche or Cathedral of Our Blessed Lady. Do not miss the English Garden, Neuschwanstein Castle or the Nymphenburg and Residence palaces. Other must-visit attractions include the Olympic Stadium and the BMW Headquarters and Museum.

Beer and Brewery Tours From Munich

If you visit during Oktoberfest, then there is no need to discuss this any further. But even otherwise, beer lovers will never want to leave Munich after getting addicted to Munich's beer gardens and Weissbeer. Most brewery tours will begin or end near the Marienplatz, where the Hofbräuhaus has ruled Munich as the world's most famous beer hall since 1589. Eat the veal sausage and drink beer in 1-liter steins as Bavarian bands play live music. Other breweries worth visiting in Munich itself include Erdinger and Löwenbräu. If you are willing to drive around a bit, you can visit the Andechs Monastery & Brewery, Ayinger Brewery in Aying, and Weihenstephan Brewery in Freising, which is the oldest brewery in the world dating back to 1040.

Dachau is ground zero, as far as Nazi atrocities are concerned. Located about 10 miles from Munich, it was the first concentration camp and was operational for 12 years (1933-1945) of the Third Reich. Your tour here will vividly show you how this one camp alone exterminated 43,000 prisoners. You will be taken along the route that new arrivals had to follow, from baths to barracks to the courtyard and then the crematorium. It is a 3 hour tour, if you take the guided one with pickups at the Marienplatz. If you want to visit it on your own, it will take you around 25 minutes on the B304, with the Olympic Park and Karlsfeld along the way.

How to Hire a Car in Munich

Apart from the Bahnhofplatz airport depots offering a car rental in Munich for travelers, you can find as many as you want all over the city. Tourists will bump into many of these agencies on Marsstraße. Rather than look around locally after you arrive, the better way would be to use an online service to compare all the available deals. Choose the best deal you can get and book your vehicle right now, so that it will be waiting for you upon arrival in Munich.